Please Take Note Of This Disclaimer 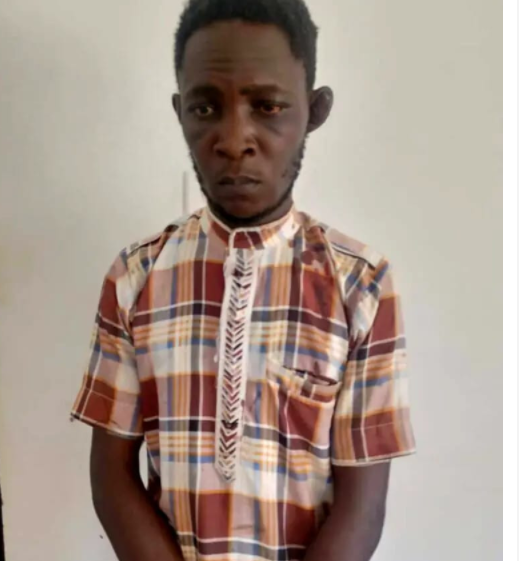 29-year-old Teleheem Kamaldeen, a computer technician, was on Sunday, December 27, arrested by operatives of the Intelligence Response Team, IRT, over the abduction of a 9-year-old pupil in a private primary school in the New Nyanya area of Nasarawa  State.

The suspect who confessed to the crime said he had been monitoring the pupil and his parents’ movement who live in his neighborhood for about two months before executing his plan.

According to Teleheem, on the day of the kidnap, he posed as a computer instructor sent by the child’s parents to get the pupil, and when he got to the school, he discovered that access into the premises wasn’t as difficult as he had imagined and he was allowed to take the child without much hassle from his teachers.

He explained that after sighting the child on the playground, he told him he had been paid by his mother to give him computer lessons, and the excited pupil followed him afterward without hesitation. The child was then taken to a hotel accommodation where he was given a computer to operate while he called his parents to demand a N4 million ransom, but was eventually given N1.5million.

The Force Public Relations Officer, CP Frank  Mba, advised owners of schools to put in the appropriate measures that would check those who bring and take children from schools or the Police would be left with no option but to arrest and prosecute owners of schools alongside the suspect found wanting.

Timothy Ozovehe is a Digital Media Expert & Blogger who is passionate about educating, informing and giving the general public knowledge that will benefits them in their day to day life.

Quickly leave your comments/enquiries and I will reply as soon as possible. Cancel reply

Awaiting 2022/2023 Unilag Postgraduate Enterance Examination Results & Admission List, Here Is What Next To Do 👌

When To Expect 2022/2023 Unilag Postgraduate Entrance Examination Results & Admission List; How To Check

As Announced By Unilag, More Details About The 2022/2023 Postgraduate Entrance Exam Will Be Posted Today Nov 1st, Here Is What You Can Do Right Now To Make Sure You Don’t Miss Out